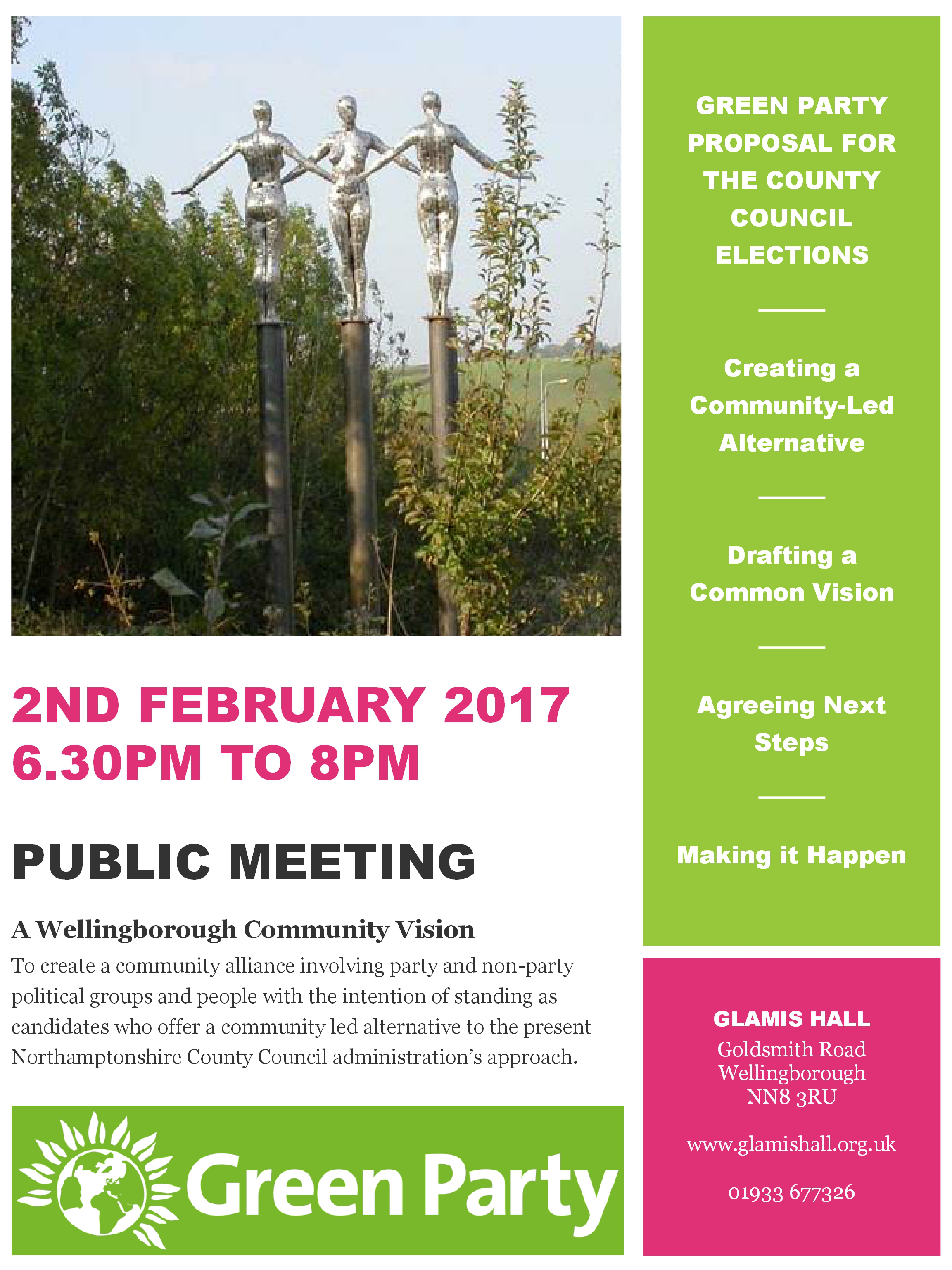 To create a community alliance involving party and non-party political groups and people with the intention of standing candidates who offer a community led alternative to the present  Northamptonshire County Council administration’s approach.

Since 2008/09 the present administration of Northamptonshire County Council has:-

(1) Cut more than a ¼ £ Billion pounds from County Council spending, with dire consequences for council services and local people.
(2) Reduced NCC staffing levels from 17,000 to a few thousand. We are on course for less than 500 staff by the end of the decade.
(3) Removed half of the street lighting in the county making many urban areas much less safe for local pedestrians and drivers.
(4) Radically reduced funding for more affordable ‘prevention’ and low level support services, and taken nearly £50 million from Adult Social Care and Children’s Services (including £27 million in 2016-17 ) – with devastating consequences for vulnerable people, Care and NHS Services.
(5) Presided over failing Children’s services and considerably reduced spending including closing many Children’s and Sure Start Centres.
(6) Undermined many voluntary sector services, with numerous organisations reducing or closing services  entirely (like the recent collapse of Wellingborough Womens Aid and the difficult financial straits for The Daylight Centre and other Community Services).
(7) Created a number of ‘so-called’ Community Interest Companies to take on the running of the remaining Council functions which will leave some 4,500 staff with jobs that are more insecure and threaten the livelihood of hundreds of workers in competing voluntary organisations, as these CIC’s ‘hoover up’ local contracts.
(8) Ignored appeals from many thousands of local residents who have tried to challenge these actions.

Many of us are appalled by these actions and have spoken up but to little avail.  With the Conservative’s considerable majority in the Council they can afford to ignore even the most constructive of suggestions from politicians, residents or professionals, and they regularly do.

The Opportunity and Vision

With the County Council elections in May we have a chance destabilise the administration’s majority and bring forward a real community based alternative. Given they hold way more seats than all other Party’s combined, this will be very challenging. We feel we can only succeed if we can all ally behind a common vision that not only inspires each of the main political party’s but also attracts residents groups and societies to our community led approach. This vision needs to be compassionate, inclusive, prosperous and economically viable for our county, and us, its residents, workers and business owners. It also needs to tackle, head on, the dual challenges of considerably reduced funding from Central Government and increasing levels of local need.

One of the major failings of the present administration is that effectively a handful of people are driving through these draconian measures, and the other 700,000 in the county effectively have no voice or say.  So any new vision needs also to include a greater opportunity for us all to take part in crafting solutions to our collective challenges.

Northamptonshire Green Party decided in Wellingborough and East Northants to see if we can pull together people from across our communities, political parties, organisations and interest groups, to see if we can craft a more humane approach in which we all lead.  We don’t expect this to be easy but we hope we can find common ground and create a common ‘manifesto’ or offer for the people of our area.  And that we can also agree a way of bringing this vision to residents in a cooperative and positive manner.  This vision needs to be innovative and inspiring, as well as rooted in the present financial reality.  And the solutions also need to inspire and drive us into action.

Selecting a Format for ‘An Alliance’

An ‘alliance’ could take many forms and this is something we will need to discuss and agree.  At the Northants Green Party AGM (28th Sept 2016) we decided that just doing ‘deals’ on one Party standing here or and another there would not be enough to make any difference given that in the Wellingborough (which has 6 County Council seats) only 1 is held by a party other than the Conservatives.  We feel if we are to have any genuine chance of success this alliance needs to be a grass roots community led movement that surpasses traditional party politics and pulls people and groups together for the good of the whole community. With an average turnout of 30% at County Council elections, we need to be looking to attract people to vote from the 70% that regularly don’t take part, so our vision needs to inspire people to come forward.  Given that our health services and the care of Children and Older people are so important to many, it would make sense to craft a community vision with these at its heart.

We plan to do the following:-

(a) Hold an open public meeting in Wellingborough on Thursday 2nd February 2017, at Glamis Hall, 6.30pm to 8pm,  to gauge interest and start to draft a common vision or list of ideas, and
(b) Agree / discuss a way of working together to bring this vision forward at the elections in May

If you are interested to take part in these discussions please get in touch and join us at the open meeting on Thursday 2nd February 2017.